With your baby at very start 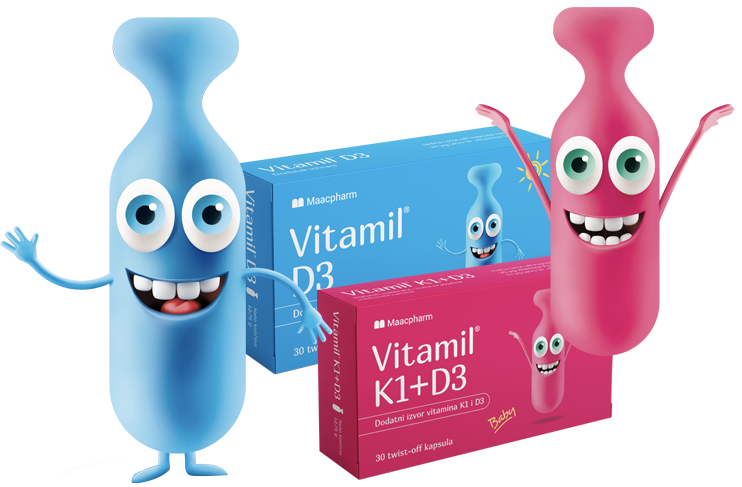 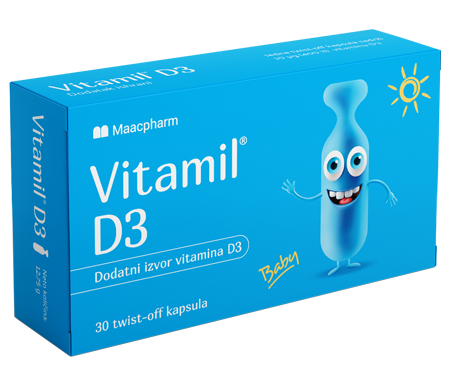 The frequent problem of babies is the mother’s low input of vitamin D during pregnancy and breastfeeding period ,which increases the risk of rackets development in babies.
The vitamin D is the fundamental homeostasis regulator in organisms and contributes the preservation of normal bones and teeth

1 twist- off capsule a day from the 8th day after birth to one year old. Turn the upper part of the capsule (cap), pull and remove it. Then press the capsule and squeeze out the content into baby’s mouth, on the spoon or mix it with milk. After one year , the product should be used only during winter months ( from October till March)

Keep it in a dry place, protected from the light at temperature 15-250C,
out the reach of children 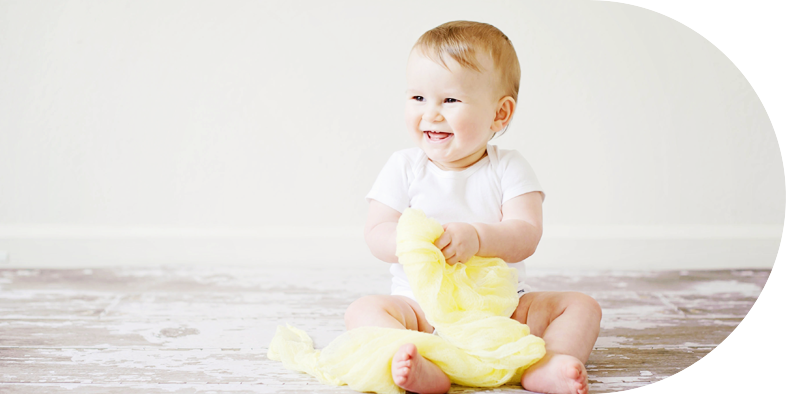 Vitamin D has very important role into each system in the body, on your skin, brain health, bones, level of sugar in blood, hormone balance and prevents the development of autoimmune diseases. 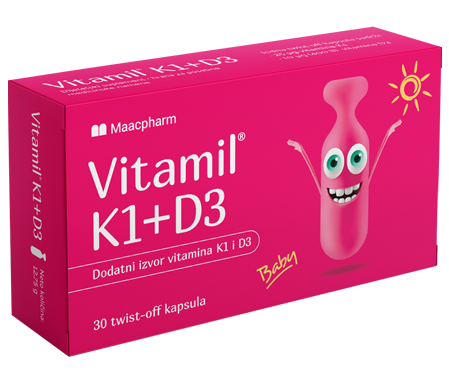 Scope of the product:

Lack of vitamin K is still has been the spread problem for newborns.
Vitamin K very little passes through placenta and is present with low concentration in mother’s milk. That is why this is not surprising that newborns have very little level of vitamin K in blood. The hemorrhagic diseases of newborns, as the result of vitamin K lac is still the problem, primarily for the breastfed babies.

1 twist-off capsule a day from the 8th day until third month as of the birth, especially for premature born babies and breastfed newborns. Turn the upper part of the capsule (cap), pull and remove it. Then press the capsule and squeeze out the content into baby’s mouth, on the spoon or mix it with milk.

Keep it in a dry place, protected from the light at the temperature 15-250C.

Do not put the whole capsule into child’s mouth. Squeeze out only the content.

The product may be used only under the medicalcontrol! The product should not be taken by persons sensitive to some of the ingredients. 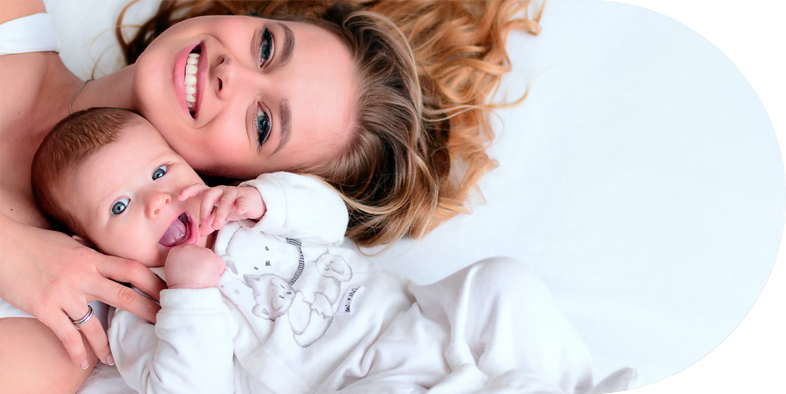 Vitamin K is important liposoluble vitamin that plays important role in health protection of your heart, build of bones, optimization of insulin level in blood and helps blood coagulation.

This term includes the group of compounds of similar structure with hemostatic effect. Besides the role in hemostasis, these substances are included into bone metabolism and other processes. Mostly, they can be found in green leafy vegetables, hemp seeds, liver and fish.

Vitamin K1 or phyloquinone is the basic form into foodstuff and in circulation. Green leafy vegetables represent 40-50% of input of this vitamin. Besides, olive oil, canola, soya and cotton seeds oil are good sources of vitamin K1.

This is the group of substances called menquinone. The sources are yolk, butter, beef liver, some kind of cheeses and fermented soya products.. This form of K vitamin is produced also by some bacteria which are the part of intestine microflora in human organisms. Intake by food of viramin K2 is much less than of vitamin K1.

Vitamin K3 - menadione is used in animal feed. It is metabolized up to K2. All three forms of vitamin K are liposoluble substances. 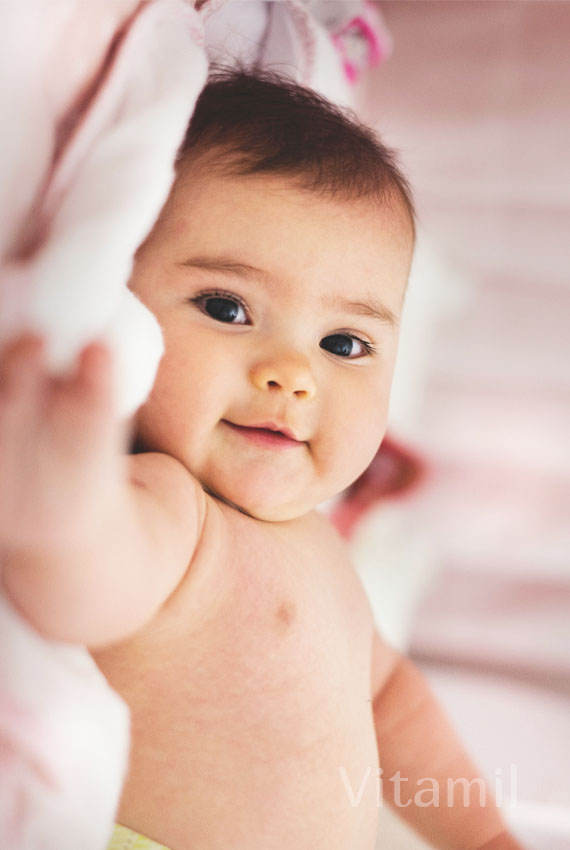 Avitaminosis of vitamin K may appear in certain condition- insufficient intake of food, malabsorption syndrome, loss of depot due to hepatocellular diseases. The deficit often appears in persons with chronic liver diseases. Cumaric anticoagulant, for example Varfarin, causes the state similar to avitaminosis of vitamin K by the inhibition of reduction and recycling of vitamin K, and some cephalosporin antibiotics have similar effect. The avitaminosis symptoms are easy bruising, epistaxis, bleeding in GIT, menorrhagia and hematuria. The chronic vitamin K deficit may cause osteoporosis and increase the bone fracture risks. In food supplements are used K1 and K2 forms of the vitamin. The vitamin K has hemostatic effect and may act antiosteoporotic , antioxidant, anticancer. Pregnant and breastfeeding women should take vitamin K dosage less than 65ug a day unless is recommended by physician differently. Side effects are rare in application of supplements with the optimal dosage. Sometimes may appear reversible surface values of some liver enzymes.


Vitamin D is composed of two forms: ergocalciferol- D2 and cholecalciferom- D3, as well as their metabolites and analogues. All of them have anti-rickets effect. Vitamin D is the only vitamin in human organism which is conditionally essential: the most important quantity is created in the skin, by photochemical reaction of the provitamin 7-dehydro-cholesterol and UVB sun radiation. In cases when the synthesis is insufficient ( older persons, residential geographic position, avoidance the sunbathing due to skin cancer and so on) the supplementation of vitamin D is needed and then it is considered to be essential vitamin.

In organism, the basic calcium hemostasis regulator is vitamin D. It is especially important in the skeletal development and bone mineralization.

The active form of vitamin D is I-alpha-25-dihydroxyvitamin D or 1,25 (OH)D, which, in order to affect, has to bond to receptors which are mostly located on the nucleus of the specific cell. Vitamin D increases the efficiency of calcium absorption and much less absorption of the phosphorus from the small intestine.


Only small number of foodstuff is the source of vitamin D: oily fish, fish oil, chicken eggs feed with vitamin D. Almost total intake of vitamin D from the food comes from the enriched milk and similar products such as cereals enriched with vitamin D. Vitamin D is liposoluble vitamin and its absorption depends on the presence of malabsorption diseases: chronic liver disease, Crohn’s disease, cystic fibrosis, celiac disease. Person under the risk of vitamin D deficit development are those that do not take milk, do not sunbath, live in the areas where there is not much sun or are alcoholic. Also , older persons because they do not sunbath much, take small quantities of food with vitamin D and use some medication that influence the absorption and/or vitamin D metabolism. They create less vitamin D in skin and less absorb it into GIT. The use of cosmetic preparations for the sun protection also present the risk factor for the appearance of vitamin D avitaminosis.

Pregnant and breastfeeding women should avoid vitamin D supplementation in the dosage greater than recommended- 400IJ or 10ug a day unless is prescribed differently by a physician.

Mother’s milk is sufficient for all baby’s needs except for vitamin K in the first months, vitamin D and iron for some populations. Vitamin K, known as anti-hemorrhagic vitamin, is found in very low concentration in mother’s milk which may cause the risk of hemorrhagic disease to breastfed newborns. The often problem with the babies is the low mother’s intake of vitamin D during pregnancy and breastfeeding, which increases the risk of rickets in babies.. Vitamin D is the basic regulator of calcium homeostasis in organism. It is especially important in skeleton development and bones mineralization. Disorder in growth, lethargy, nervousness are early symptoms of vitamin D deficit. The risk may present the exceeding supplementation of vitamin D. The preparation Vitamil K1+D3 present optimal combination of vitamin K1 and D3 to use for suckling who are in the risk of certain diseases caused by their lack in accordance with recommendation for the oral prophylaxis of newborns in many EU countries.

Have you got any question? Send us message.